The Kgalagadi Transfrontier Park in South Africa has several wilderness camps among which  Urikaruus is one of the more popular.  The camp is just off the Auob Road on the western boarder of the park between Twee Rivieren and Mata Mata rest camps. 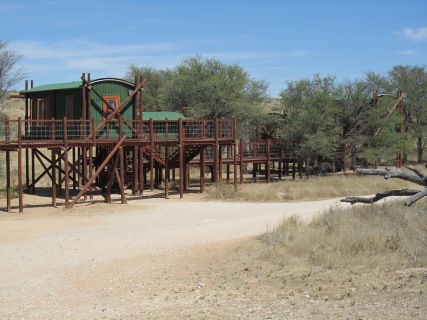 Urikaruus camp is located about 500 meters off the road behind a large dune and contains four two person units set among some Camelthorn Acacias that look out onto their own private waterhole in the Auob river bed.

The wilderness camp has no restaurant, no shop, no fuel, no drinking water, no AC, and the electricity is provided by solar panels.

The accommodations are rustic with four elevated double units that sort of resemble Gypsy wagons set on stilts connected by suspended walkway.  The larger higher unit contains a bath, and a bedroom with two single beds and a small bal 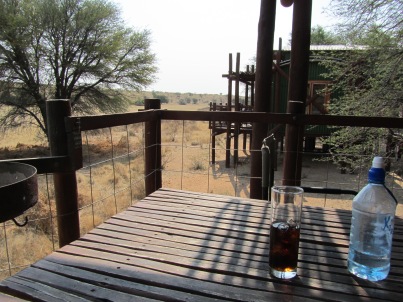 cony.  The lower unit contains a small kitchen with a refrigerator, hotplate, sink, small tail and 2 chairs plus a small deck with table and chairs and braai. Parking is under the larger unit.

Urikaruus is not fenced and wildlife can move freely through the camp.  The waterhole is frequented by lion, cheetah, leopard, antelope, giraffe, spotted and brown hyaena and wild cat among others.   Several leopard territories overlap here and there is a resident lion pride.  Antelopes include Oryx, wildebeest, hartebeest, springbok, kudu and eland.  After dark cape and bat eared fox visit the waterhole along with many of the other 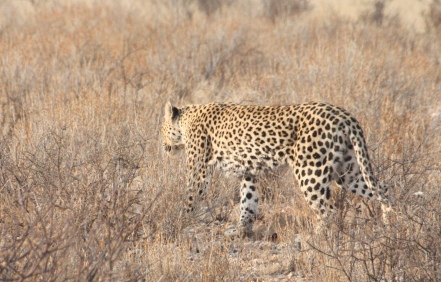 Being at Urikaruus has several advantages, one it is very private and quiet and is situated near the main road so the you can leave the camp and return using the same roads.  You also have the advantage of extra time in the park as the closest two camps are at least an hour away and this gives you a minimum of a half hour extra in the park almost by yourself before curfew or in the morning. And the biggest advantag 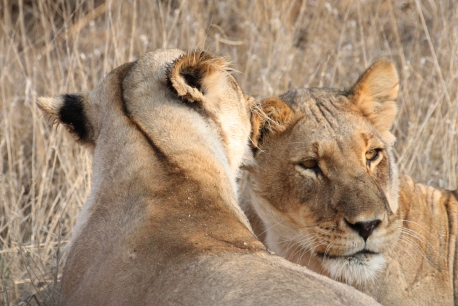 e is that you do not need to have a 4×4 vehicle to stay at Urikaruus.

The area between Urikaruus and Mata Mata is reported to be the best place in the park, some say the world, to see Cheetah. Of course leopards and lion also inha

bit this area.  Just outside of the camp at the Urikaruus waterhole we saw a pair of leopards that crossed the road in front of us and went off into the dunes.  Also at the waterhole were two female lions that we watched for about an hour being the only car 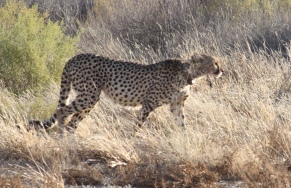 there.  They bathed each others faces then got up and crossed the road to the waterhole to get a drink before finally wandering away.

Driving towards Mata Mata we saw cheetah.  at Sitza we saw lions along the side of the road resting under a tree after having eaten a large meal.

I definitely would recommend a stay at Urikaruus.  Be aware that it is a very popular camp and that reservations must be made the minute they become available and that is a very short window. 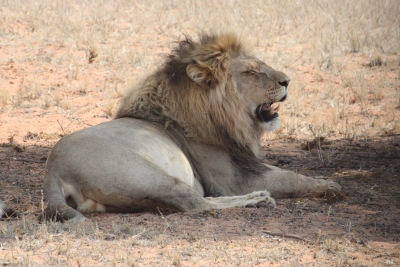