One of the most magical and a once in a lifetime sightings I have had in Kruger National Park in over 275 visits was to be able to see a mother Leopard and her two young cubs.  I was driving nort 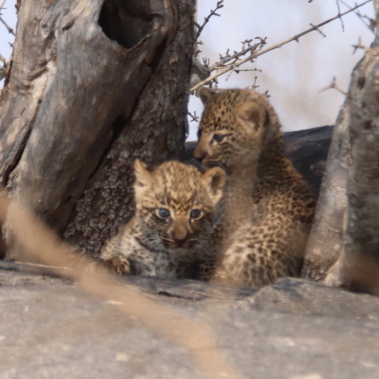 h on the Skukuza-Lower Sabie Road and was just past the Lubyelubye area when a car pulled along side and told me about a sighting of a leopard with two cubs on s36 N’watindlopfu road just off    H 1-2 Skukuza-Tshowane road.   He said the leopard and her cubs were located on top of a small koppie near the road.  I drove to the spot and was able to get a spot where I could get a few shots; the mother was not there but the two cubs were awake and playing with one another.

Unfortunately I was not able to stay that long at the sight as it was getting late and I had to be at Crocodile Bridge gate by 6pm to leave the park.  I was able to get a few pictures of the two through the brambles that 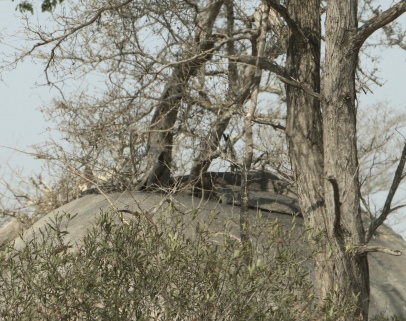 surrounded the base of two trees where the cubs were being kept but getting a clear focus was difficult.   I also did not have a prime position with my vehicle as there were lots of vehicles at the sight and several professional photographers who were set up to stay the maximum time in prime locations.

Two days later I returned to the sight at a earlier time and was fortunate in getting a better position for my vehicle.  This time mom was in residence and was napping with her two cubs. When she woke up it was bath time for all before playing with the cubs for a short while. 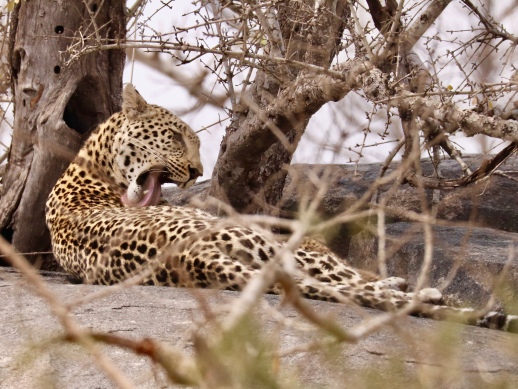 After a while mom decided it was time to go out hunting for dinner and climbed off the rocks and went off into the bush.  The two cubs played for a few minutes then fell asleep at the base of the trees. 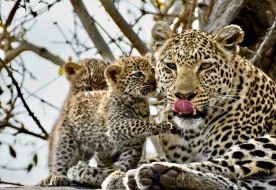 I left shortly after and returned to the sight two days later but unfortunately the mom had decided it was time to move and they were no longer on top of the koppie.  This wonderful experience is extremely rare, it is rare to even see a leopard let along one with cubs,  so I feel really privileged to have had this opportunity.