On May 5, 2019 I took my first drive in Kruger National Park for this year’s visit.   We entered the park about 7 am and drove up s28, seeing impala, zebra a few wildebeests, to Lower Sabie Rest Camp where we stopped for a break  and something to eat.  Continuing north from Lower Sabie stopping at Sunset dam but there was very little activity.  We then drove to H12

crossing over to H1-2 to Tshokwane seeing some Giraffe, Buffalo  and a few Elephants.  At Tshokwane we again stopped for a short break before driving down H10 towards Lower Sabie.  We did see some Ostrich, Elephants and a couple of Leopard Tortoise who seemed to want to walk down the middle of the road.

pair of male Lions on a Buffalo kill but only through the window of the car next to us as there was the usual traffic jam when a cat is spotted.  We continued driving south on H4-2 and were aproximately 6 km north of the southern 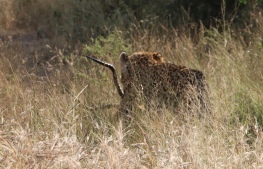 his massive body before he picked up his prey once more and began dragging it into the bush on the opposite side of the road.  Because the Impala was so large the Leopard had to drop him every few meters to take a break before proceeding further. He continued his slow progress into the bush until he disappeared out of sight.

We were very lucky to be the first car on the sighting by at least a minute or two and to be able to get some very clear shots once the Leopard had crossed in front of us.  This has to  be my best leopard sighting  ever with the  best opportunity for photos; slightly surpassing the sighting last September of a mother Leopard and two very young babies which was equally exceptional but harder to get good photos of due to the traffic and the location of the rocks where the mother was caring for her cubs.