I have been traveling to Impala Place in Marloth P

ark, South Africa since 2007 and until last week I had yet to see the elusive African Paradise Flycatcher. Within the last week I have observed at least one male flitting through the bushes across from the front veranda of the house.  (I have only captured on picture so far thus the larger of the two photographs shown is not mine).   One of the reasons I find out is that I mostly visit in the winter months of June-August and these intra-Africa migratory birds do not return to this area until September or early October…they usually return to the same area year after year.  They are usually seen individually or in pairs and favor riparian woodlands, dense woodlands and forests as well as well-wooded gardens.  The male is easily recognized by his orange-brown body and long tail feathers and its blue-grey tufted head.   The female is similar but smaller with a much shorter tail.

Because they tend to inhabit densely wooded regions they would be easily overlooked were it not for its flitting activity of flying from branch to branch.  They are generally very vocal with a high-pitched “jig-see” or a more liquid notes of “tzzee-switty-tweep 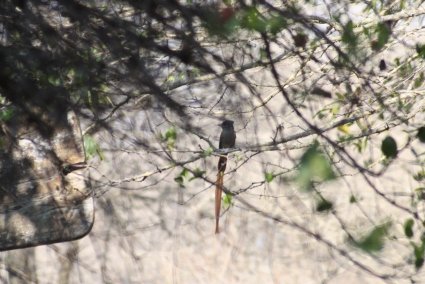 The mainly feed on insects, spiders and small berries.

They are monogamous often choosing the same tree or branch year after year.  Their nest, which is built by both sexes,  is placed on an exposed branch, well-bound with cobwebs, and camouflaged with lichen.  Both sexes share in the incubation of the eggs and feeding duties after the eggs are hatched.