The Steenbok is a small antelope that is easily identified by its reddish-brown upper parts,  its white underparts and its huge ears with a black and white pattern.  Only the male have horns which are short and straight.  They have a small dark patch in front of their eyes.  They can be found  mainl 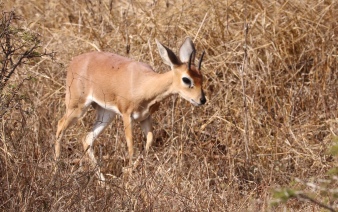 y in arid areas, in open woodlands, savannas,  where there is enough bush to afford them some cover and protection.  They are solitary animals except when the female is with a calf or during the mating season.

They are mainly  diurnal  but can be active during the early morning or late afternoon.  They are territorial and they defecate in narrow scrapes which they cover, as well as urinating to mark their territory.  Serious territory conflicts are rare and juveniles will defe 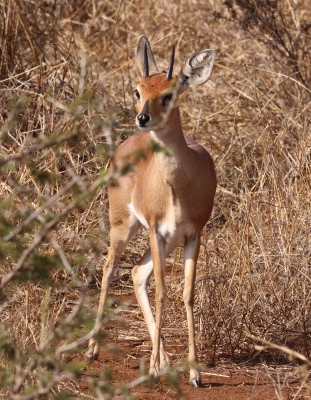 r to territorial adults.  They will lie flat in the high grasses to avoid detection and will only dart off at the last second to avoid predators

Their predators include:  lion, leopard, cheetah, wild dog, and hyaena.  Lambs are susceptible to caracal , wild cat, jackal honey badger, and a variety of large eagles. One lamb is produced and is generally weaned at three months.

Steenbok are mainly browsers consuming a variety of leaves, seed pods, fruit, seeds and berries.  They will also graze on freshly sprouted green grasses.  It is always exciting to see one of these tiny animals .