The Tawny  Wahlberg, and Martial eagles are three of the many eagles to be seen in Kruger national Park.  All three of  these beautiful

birds of Prey favor open woodlands and savannas where there is abundant prey in the form of small animals and birds with the Martial eagle preferring lizards and the Tawny not adverse to carrion The Wahlberg eagle will eat birds and reptiles as well as frogs and insects. The Tawny eagle will also pirate food from other eagles.  The Martial eagle and his mate need a huge territory as 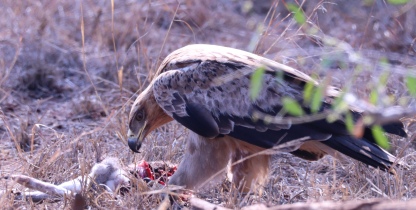 they can take fairly large prey including small antelopes. All three, the Wahlberg, Tawny and Marital eagles are monogamous and all nest high in trees canopy or on high pylons in the case of the Martial eagle.  The Wahlberg’s nest is below the canopy and they use the same nest year after year.  All three are fairly common in their preferred habitat.