Recently there have been quite a few sightings of Cheetah on Nhlowa Road (s28) in the Crocodile Bridge area but until a couple days ago I have not been lucky enough to have witnessed one.  M

y luck changed when we were doing an early morning drive up to Lower Sabie using the dirt road s28, just north of the turn off for the private lodge Shishangeni I spotted three wonderful Cheetah about 10 meters from the road on the West side where the sun illuminated them perfectly.  As a couple of other vehicles arrived behind my vehicle the three began to move to the north along the road and eventually crossed the road directly in front of us and eventually disappeared into the bush on the eastern side of the road.  I have seen Cheetah several times in Kruger on H4-2 Gomondwane Road, on H10 and on the Mlondozi loop s29 but none of the sightings were as close or as good as this one. 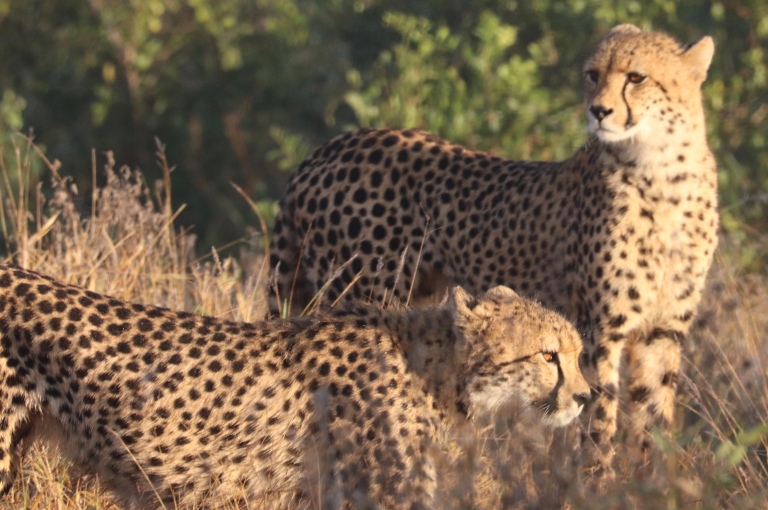 3:30 in the afternoon, when I noticed a number of cars on the side road leading to Ntandanyathi bird hide.  I pulled onto the side road and inquired as to what was being seen and was told Cheetah.  Only one Cheetah lying in the grass was somewhat visible but I was patient and waited to get a better position for the car.  After a few minutes I was rewarded and was able to see two Cheetah.  One lying down in the grass and the second one sitting up looking around at the surroundings.  This is quite unusual to have two sightings of Cheetah within a week of one another.  I usually feel myself lucky to have one sighting in any two month period of my stays in South Africa.