Our boat docked at Bukoba just a short drive from the Uganda boarder.  Bukoba is Tnazania’s second largest port on Lake Victoria.   As per Peter’s instructions I hired a taxi to take us to The Lake Hotel right on the shores of Lake Victoria.  The Lake Hotel was in its prime a beautiful old colonial building with a veranda overlooking the lake, where Hemingway is reported to have stayed when visiting the area.  In 1997 when we visited the hotel it had definitely seen better days, I asked to see beds as we did not get much sleep the night before but the beds I was shown were jumping with bugs so I declined and opted to wait for Peter on the veranda.  We ordered breakfast (eggs and toast) and began our wait.  The grounds were surrounded  by hedges  that were completely covered with spiders webs a member of the staff walked the hedges witha broom like devise removing the webs twice while we waited and within a few minutes the spiders had replaced the webs.  It was very eerie.

The vehicle arrived and we headed for the boarder.  After crossing the boarder into Uganda we spent about an hour on a dirt road until we reached the tarmac road. We stopped for a break at a very clean and modern Petro station for fuel and a bathroom break.  We were heading into a town down a steep hill when Peter noticed a kid on a bicycle that was heading right towards the vehicle.  Peter slowed down and kept moving to the left and honking his horn to no avail and the kid ran into the vehicle at full speed hitting the front side, bumper and flying over the vehicle landing on the tarmac.  By this time Peter had moved so far to the left that the vehicle virtually rolled over on its side when it hit a culvert.  We were immediately surrounded by hoards of people that had been walking down the hill to market.  The police  come and we are taken to a small station at the top of the hill for questioning.  Thankfully one of the men in our party was a retired police officer and the other a college professor whose opinion and observations were more highly regarded that the ladies.  Meanwhile the police had set up a guard on the vehicle, but even so we lost a shovel, our fire grate and a few 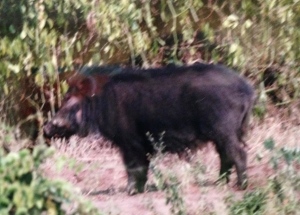 other small items that had probably fallen off the vehicle when it rolled over.  The police allowed us to proceed to Masaka to stay the night but we had to return to the station in the morning.  After another hour or two in the morning with the police Peter agrees to pay for the hospital bills for the kid who ran into us and we are allowed to continue on our way.

Our next stop is kampala the capitol of Uganda where we stay at the Equatoria Hotel which is in the center of town and newly remodeled.  After lunch Peter arranged for us to goto a nearby mall to shop while he had the vehicle inspected and a few minor electrical items fixed.  For dinner Peter took us via taxi to an Ethiopian restaurant.

It took most of the morning for the vehicle to be repaired and we finally left the hotel around noon.  It was a three hour drive to Mburo Park where we camped overnight. Next to the park are the ranches of the Bahima tribe who herd the famous long horned Ankole Cattle which are a common site in this area. When Joshua saw these cattle all he could think and talk about is how he needed to ge

t one and take it back to his village in Kenya.   This was a very crowded camp, after dinner some Waterbuck came up behind the tent to inspect us being in their territory.

In the morning we continued to Queen Elizabeth National Park.  At this point in the trip we were to go to Ruwenzori National Park, the base camp for doing Gorilla Treks but, we got word that human gorillas were in the area and it was not safe to go at this time.  About two weeks later some tourists were kidnapped from this camp and later killed by the gorillas so we were ultimately happy about our decision not to go at that time.

l Park is bordered  on one side by Lake Edward and the other by the Ruwenzori Mountains…it has made a great recovery since the days of Edie Amin and the lake is filled with hippos.  It is here we see the Uganda Kob and Giant Forest Hogs which are unique to Uganda. We take several game drives in the park and see logs of wonderful game.

Leaving the park we have about a six hour drive back to Kampala….after about four hours the fuel filter gave way and again bega

n spraying diesel due onto the front windscreen.  We were forced to stop about two hours short of Kampala to have it fixed thus arriving back at the Equatoria Hotel about 6 pm.  We went to the Indian restaurant in the hotel for dinner.  Our next destination is Kenya and we will stop at a hotel, Tea House in Kirietto for the night.  In the morning we will go to Lake Nakuru for three nights then on to the Mara to end our safari.