Once we get through customs at the boarder get into to two taxis that will take us to Arusha.  The guys are in one taxi and the girls in a second.  On the way the taxi that the guys are in has radiator problems and we have to stop for some repairs.  We finally get to the Impala Hotel at about 3:30 and I ask Joshua what Peter’s last name is (up to this point all we have been told is Peter)…of course Joshua didn’t have a clue and said “his name is Peter just Peter”…I finally figured out with the Hotel staff what name the reservation was in and we went to our rooms.  Joshua made us sandwiches in my room from the bread, cheese and tomatoes that we had bought in the Market at Mananga.  After lunch we visited a Cultural Heritage site and returned to theHotel.  When Peter finally arrived with our camping things we went to a Chinese Restaurant for din 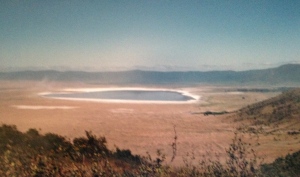 ner.  Joshua had never had Chinese food and found eating with chopsticks very funny but he like the food.

In the morning two safari vehicles pick us up at 9 am to take us to Ngorongoro Crater.  We plan to camp on the edge of the crater tonight. One vehicle is for us and one is for our gear, the later we will meet at the camp later. We arrive at the Crater mid-afternoon.  This volcanic crater is 20 km wide with 600 meter high wills is packed with just about every species of wildlife found in East Africa.  Despite the steep walls there is considerable movement of animals in and out of the crater –mostly to the Serengeti.  It is a favorite spot for wildlife as there is a permanent water and pasture at the bottom of the crater floor.  Local Maasi tribespeople have grazing rights in the crater.  We drove around the crater until about 5:45 seeing Lion, Wildebeest, Zebra, Bat Eared Fox, Hippo etc.  About an hour and a half before we left the crater we got word that the truck carrying our supplies to the camp ground on the rim of the crater had broken down which meant that we again may have to stay at a hotel or lodge.  Just as we got to the rim and were about to head to the Lodge we got word that the truck was fixed and we would meet it at the camp ground.  The camp is very crowded with tents everywhere but we finally get ours set up and Joshua fixes us dinner.  It was extremely cold during the night (nearly freezing) and we woke up to fog and mist.  Packed up camp and headed for the Serengeti on some very bumpy roads.

We got into the camp grounds and set up our tents.  Joshua fixed dinner and the two drivers with our vehicles went off to the lodge tosleep.  We go off for an early game drive and return to camp at about 10 am for breakfast.  After breakfast we took showers and sat around the camp grounds for a while.   It is very hot our and Peter is not feeling well and thinks he has heat stroke. I suggest that we  go to the lodge where it is air conditioned and sit in the bar area until it is time for our afternoon game drive.  One of the other drivers/guides sees Peter and immediately knows he has malaria and goes to his room to get some medication for Peter.    Peter stays at the lodge while we

go for a game drive where we saw three young female lions who put on quite a show for us,  later we saw a pair of mating lions.  We picked up Peter and went back to camp where  Peter went immediately into his tent for the night.

I am a bit concerned as our camp is very isolated and Peter has been sitting in the lodge all afternoon so a number of drivers/guides etc know that he is ill and that we are pretty much on our own at night as the two drivers of the vehicles we are using go to the lodge at night.  I suggest that every one be very careful with their valuables and put them into their sleeping bags so they are nota temptation if someone comes snooping around the camp.  There is a noise about an hour after we retired to our tents…it is the other drivers who have brought the trucks back to our camp and sleep in them as they are also fearful of us having unwanted visitors.

Thankfully in the Morning Peter is feeling better.  Today we are getting a new vehi

cle.  The company has a group doing a reverse trip so we will take their vehicle and they will switch to the ones we are using and head back to Arusha.  We have to give up more equipment as this vehicle is smaller that the original vehicle we started out with.  After driving all day we finally arrive at our new camp Kijershi Tented Camp.  At Kijershi my tent is the furthest from the lodge area, I have a great view of the bush and a beautiful sunset.  There was a pool up by the lodge so after settling into my tent I took a swim.  We had dinner at the lodge.

In the morning we are off to Mwanza, Tanzania where we will catch a ferry to take us across Lake Victoria to Uganda.  We are making good progress when a fuel line on our vehicle begins to leak spraying fuel all over the windscreen. About 5 km out of Mwanza we run out of fuel and Peter has to hitchhike into town to get more fuel.   Meanwhile there was a market a few hundred feed from where we were stranded so we left Joshua watching the vehicle and we walked down to the market and did some shopping.  When we got back Joshua went and also did some shopping.  Peter returned and was able to patch the fuel line and put some fuel in the tank so that we could proceed to Mwanza arriving about 3 pm.  While we had lunch at a pizza place Peter went to the docks to make arrangements for the boat.  He returned about an hour later telling us that the boat we were to have taken was in for repairs and was not running today and the boat for tomorrow was only for passengers and not one were the vehicle could accompany us.

We are staying the night at Hotel T 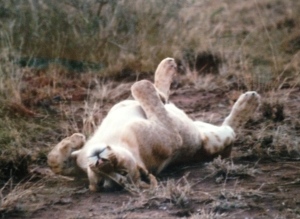 alapia which is on the water near the yacht club.  Tomorrow we will have a day in Mwanza.  In the morning Peter went to the dock to make arrangements for us to take the ferry, I am hopeful he can get cabins, but that is not to be.  We went to the boat early and I stood around waiting to see if I could get a last minute cabin at least for the fir;s but, again no such luck.  I then had everyone come to the bar and I proceeded to chat up the bartender and have a couple of drinks tipping him very well.

When the bar closed for the night fortunately we were not kicked out.  The bartender just lowered the lights and locked the doors allowing us to “sleep” in the lounge chairs in the bar.

Meanwhile Peter and Joshua with an armed guard were driving the vehicle around the edge of the lake and would meet us at the other side.  Peter had given me money for a taxi from the docks to a hotel on the water where we could wait for him at Boroba.