I had been traveling extensively since my first trip to Europe in 1967.  In 1995, in my early 50’s I fell in love with Safaris.  I had traveled fairly extensively in North Africa visiting Egypt and Morocco several times; as well as travel to Turkey, Jordan, Israel, Europe, Australia and New Zealand.  Having always been a lover of Nature the next logical destination  was Eastern Africa and a Safari to Kenya.  I contacted a small safari company in Nairobi, Rafiki Africa, run by Chris and Avril Mac Donald.  Together we planned a private three week camping safari around Kenya followed by a week on the Island of Lamu.  The trip was limited to 5 people plus a driver, Maasi guide, a

cook and a camp assistant.

Our first day in Kenya was spent doing some shopping and visiting Karen Blixen’s house just outside Nairobi at the base of the Ngong Hills. This is where the film “Out of Africa” based on the book of thew same name was set.  The house itself, surrounded by huge cypress trees, is a modest stone building with a columned veranda with a view of the Ngong Hills.  It wasn’t hard to imagine Robert Redford sitting in a wicker chair on the Veranda.

The next morning we met our driver Rob Dodson, AKA the Kenyan Cowboy. and our Maasi guide Jackson Looseyia.  (Rob and Jacksonowned a camp in the trans Mara area on the Mara Ri 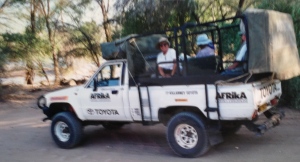 ver named Olonana which was to be our first stop.)

Our safari vehicle was a converted Toyota truck with a detachable trailer for camping essentials.  The back of the truck had been outfitted with bench seats and a roll bar structure with canvas roof and side panels with plastic windows that could be rolled out of the way for viewing.

We drove southwest out of Nairobi to the Great Rift Valley on our way to the Mara area in Southern Kenya.  The Great Rift Valley is clearly visible from space stretching from Baikal in Russia, through the Red Sea to Tanzania.  As you defend into the valley the first sight that greets you are huge satellite dishes.  Once past the dishes the wonders of the valley unfold with a variety of animals appearing in every direction.  Seeing our first Zebra we yell to Rob to stop so we can photograph it even though it is several hundred feet away.  This continues as we catch sight of Impala, Grant’s Gazelle, Thompson’s Gazelle etc. until Rob tells us we do not have time to stop for every animal we see.  Rob claims the migration is starting in the Mara and we will have many opportunities to see lots of animals.

We stopped for lunch of sandwiches and soda which we ate sitting on a Maasi red plaid blanket next to the truck.  Rob pulls a t

wo foot by three foot sign of the the back of the truck that reads:  GILHOOLEY EXPEDITION…Samburu, Rift Valley and the Maasi Mara…in the footsteps of the early explorers….Afrika Oddessy Expeditions.  This sigh which is hand painted on wood accompanied us through the entire trip and was displayed at every camp.  After lunch we encounter more animals including elephants, a cheetah that had eaten so much it couldn’t move, a small herd of Zebra and a pair of Maasi Ostriches with their pink necks and legs.

“RELAX YOU’RE IN MAASI COUNTRY”  We arrive at Olonana, our first destination, just before sunset after a harrowing descent on a nearly non-existent road of potholes, deep ruts, rocks and mud.  At the bottom of this hill was a bridge crossing the Mara which we crossed and drove a short way to the camp.  Olonana was a permanent camp attached to a Maasi Village and Cultural experience that Rob and Jackson had developed to help tourists like ourselves understand the Maasi way of life better.

We are welcomed with refreshments by the morran warriors that life at the village next to Olonana.  The Morran are young men, warriors that let their hair grow long and dye their hair with henna.  They dress with layers of beads and live together in a special enclosure during this period of becoming a member of the adult society.

After the welcoming ceremony next to the river, which was filled with noisy Hippos, we continue to the camp for dinner.  At dinner we a joined by Futa, the camp bull terrier, Rob and Jackson. Rob and Jackson talk about the area and the warn us about Hippos which are very close to the camp in the river.  Never get between a Hippo and the water….more people are killed by Hippos than any other animal in Africa.

We are shown to our tents after dinner.  My tent is on the flat ground ab

out 30 meters from the river, there is an escarpment about 2 meters behind my tent, the tents of the other members of the group are on the top of the escarpment.  As  part of the camp there is a reed enclosure next to the river that serves as a loo and shower area.  The whole camp is guarded at night by escari who patrol the grounds and will escort you to the loo area during the night if necessary.

During the night I hear a chomping sound which is occasionally followed by low grunts…as I listen the sounds get closer and I realize that it is a Hippo which has come up onto the grass to snack on the tender blades of grass near my tent.  The volume gets louder as he gets closer and closer to my tent passing between the back of my tent and the escarpment.  A while later I hear him splash back into the waters of the Mara.  The whole process took about 30 minutes during which I am lying in my tent trying not to make a noise or move and praying the Hippo does not realize that I am between him and the water.  (This is before I come to realize that the majority of animals view tents, vehicles etc. much the same way they view rocks).  At one point I try to look out my back window and see absolutely nothing as the Hippo is blocking the entire window area with his body.  Where are the escari when you need them?

In the morning over coffee I mentioned to Rob that he should try to reschedule his “lawn service” for daylight hours, explaining the Hippo encounter during the night.  Rob swears that the Hippos never come up into the camp and prefer the other side of the river for their nightly feeding.  I take him over to my tent which is covered with tin bits of grass that had been deposited by the smacking jaws of the Hippo.

Olonana was started by Rob and Jackson as a cultural experience, part of which is visiting the village, a manyatta, with huts built by the women from sticks and mud.  The huts consist of a large bed area for the husband and a smaller enclosed bed for the wife and children.  Between is a small area for a fire.  There is sometimes a room attached for the animals.  The entire villages surrounded by sticks and pieces of dead scrub bushes with thorns that form a fence like barrier to protect the village and their animals (cows and sheep) from predators at night.  As part of the Olonana experience visitors can stay overnight in one of the huts.

Before going out for a game ride the following morning we again visit the village and meet many of the women.  They have a small shop where they sell beaded jewelry and other items like kangas the cloth that serves as  clothing for both men and women.  Tohelp the women of the village Rob and Jackson have brought in a Maasi woman, Beatrice Nututu to teach the women how to make various types of beaded jewelry both traditional designs and those that will appeal to tourists.  This was part of a project to help empower the women by giving them a means to make some money.

Olonana still exists today, and is still associated with a traditional Maasi Village.  Rob and Jackson sold Olonana the following year to new owners Abercrombie and Kent who have changed the entire feel of the place into a luxury camp.