Our time at Olonana is over and we are heading to Hell’s Gate National Park.  We drive out oof the Mara on the only western road going north, a gravel road that has not been graded in years and is full of potholes, ruts and is like driving over a wash board, we break an axel on our small trailer that contains most of our camping supplies.  It is about 3:30 in the afternoon.  Rob unhitches the trailer and decides to drive to Narok to get the parts to fix the trailer.  Being a driver in Kenya also means being a mechanic.  Jackson stays with us alongside the road while Rob and the cook Joshua take the truck to Narok.   Rob tells Jackson to wait until 6:30 before setting up came.  Well, if we are possibly going to set up a camp I decide we will need a fire and get everyone to collect small twigs (no wood available to speak of), dry grasses and dried cow dung patties.  Jackson finds a few rocks to make a fire circle 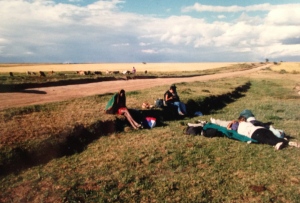 and soon we have enough fuel for a nice fire in case we have to set up camp here.

At 6:30 jackson and I discuss beginning to set up camp while there is still a bit of light when Rob arrives with the truck.  He has arranged for us to stay in a farm house not too far away.  We transfer our luggage and sleeping bags to the truc  Rob has arranged to have guards stay by the trailer overnight.

The next morning we sit around the farm house waiting for the parts to arrive from Nairobi via Narok to the farm so that repairs can be made.  After the axel is fixed we are on our way to Hell’s Gate.  Rob showed us how he earned the title “Kenyan Cowboy” by trying to make up time by taking a “short cut” across open savanna.  Jackson keeps asking Rob if he knows where he is going always being assured that everything was fine…Relax you’re in Maasi Country”…yea sure. Finally Jackson convinces Rob to ask some people passing by for directions only to find out that we are completely lost.  P

eople we passed had been pointing to the truck and laughing for over an hour…they would wave the laugh…they laughed even more as we backtracked to the point where we could again head for Hell’s Gate.

Soon Rob decides that it would be faster to go to the back entrance into Hell’s Gate which is close to the camp site we will be staying.  We get to the “back door” so to speak only to find that the road is now blocked as the property has been sold to a man in Saudi Arabia. It’s almost nine pm and Rob convinces the guard at the gate to phone the owner in Saudi on a satellite phone (before cell phones) to get permission for us to travel through his property for ten minutes to the back entrance of the park. This of course did not work and we now had to drive two hours around the park to get to the main gate.  Thankfully when we got there the officials at the gate let us drive into our camp site with a park escort.  After setting up camp we had a very late dinner and were in bed shortly afterwards.

In the morning we are greeted with a full English Breakfast including baked beans on toast…needless to say, we from the States did not partake in that “English” tradition but Rob, tucked into them like they were gourmet fare which explains his second “nick” name  “ole shitake”.

Rob has found us a campsite that is surrounded by large sage bushes that give off a delicious odor as well as hiding us from the surrounding area and other campers, giving us the impression that we are out in the bush all by ourselves.

Hell’s Gate was established in 1984.  The setting is one of intense volcanic activity with hot springs and steam jets.  Unique plants, able to withstand high temperatures grow around these springs.  There are several volcanic plugs that rise out of the valley floor creating unique looking “towers”.  The back drop to these towers are dramatic cliffs of columnar basalt which form the walls of the gorge.  High in the crevices can be seen a variety of birds including, The Griffon Vulture, the Black Hooded Vulture and the magnificent Verreaux Black Eagle.  Thousands of Swifts dive around the cliffs in the early evening.  Game congregates at water holes that have been provided in an otherwise waterless region.

While camping at Hell’s Gate we visit Lake Naivasha where we take a boat ride around the lake from Safari Land Lodge.  Lake Naivasha is called “Pearl of the Rift”, a fresh water lake that spreads over 110 sq. kms. creating a sanctuary for over 400 bird species.  The edge of the lake is lined with papyrus and the center of the lake is teeming with hippos.  It is on the shores of Lake Naivasha where Joy and George Adamson established Elsamere, a living memorial to their work with lions where the movie “Born Free” ba

sed on their work is shown daily.

Lake Nakuru is also near by so the next day we visit this park.  The name of the lake comes from the Maasi word Enakuru which means “place of the swirling dust”.  The park is set in Acacia forest wherevisitors can see Rothchild Giraffe, White Rhino and Lions. 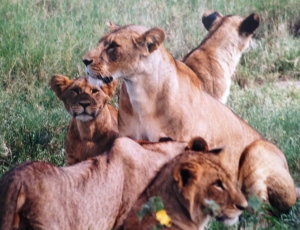 Because the lake is very high in acid very little lives in the lake but a sort of brine shrimp which attracts thousands of flamingos and pelicans.

We are lucky to see White Rhino, Kirk’s Dik Dik ( a small antelope that mates for life), and our best siting by far was a pride of Lions.  To this day I have not had a better lion siting.  The pride was right next to the road with one large male, several young females and several cubs, eleven lions in total.  We were the only vehicle at the siting, very unusual, and were able to spend a good half-hour watching the pride interact with one another.

After leaving the park we drive to the town of Nakuru to shop for food.    On the way out of town Rob forgot that there was a speed bump and hit it a a very good speed resulting in a crack in the suspension.  Tomorrow we will have to stop for repairs before going to Lake Bogoria.