Kruger National Park (The Best Place on Earth)…is the premier wildlife park in South Africa and one of the best in the world.  The closest entrance to kruger from Marloth Park is via Crocodile Gate which is at the far south-eastern corner of this huge park.  After entering Crocodile Gate you have to cross the river over a single lane, very low bridge with only small cement posts to keep you from going into th 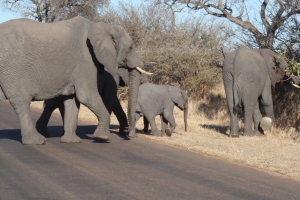 The area of Kruger was originally inhabited by theSans peoples as early as 500,000 years ago.  The park is bordered by Mozambique on the east, Zimbabwe on the North, The Crocodile river on the south and various game preserves and small towns on the west.  It is over 380 km long and an average of 60km wide, contains 20 different ecozones anda total of 35,000 square kilometers.  The park is widest at the southern end and tapers to a narrow 25 km wide point at the northern most part.  It is serviced by 10 entrance gates, two on the southern boarder and the remaining 8 along the western boarder.  The main roads in the park are tarred with a number of secondary roads being gravel.  The southern end of the park has the highest concentration of animals and the most visitors.

The ecosystems in the park vary from flat savanna grasslands , rocky foot hills, and riverine forest.  Seven major rovers biscet the park helping to sustain the wildlife.  The Big 5 inhabit the park and if you are lucky, all 5 can be seen on a single day trip.  Leopard is the most illusive of the big 5 but Wild Dog and Cheetah are equally hard to find.  Some of the roads are better than others for consistently seeing game and soon become favorite routes when spending a day in the park.

The most numerous animal in Kruger is the Impala with an estimated 110,000;  the Wild Dog, Cheetah, Black Rhino and Roan Antelope have the fewest numbers and as a result are harder to spot.  Elephants, Zebra, Wildebeests, Water Buffalo and Giraffe are plentiful and easily seen.  There are about 2,000 Liona, 1,000 Leopards and 2,000 Hyena in the park.  The park has numerous waterholes and dams that are gathering points for the game particularly in the dry season. 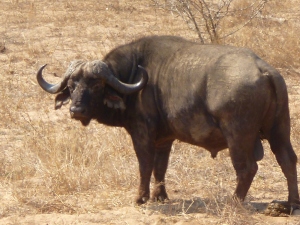 You are not allowed to drive off the road in Kruger and you definitely can not get out of your vehicle except in designated camps and hides.  A good pair of binoculars and or a long focal lens on your camera helps in seeing game that isn’t hanging out along the side of the road.  Sitings of Lion, Cheetah, Leopard and Wild Dog usually causes a traffic jam as cars jockey for positions from which to catch a glimpse and a photograph.  If you are extremely lucky and are first to sight the animal you will have the opportunity to get some good photographs before other cars catch onto your sighting.

There are a number of camps and rest spots in the park where you can get out of your vehicle to get something to eat, do a bit of shopping, use the facility and fill your car with petro.  It is also possible to stay overnight in the park in these camps a 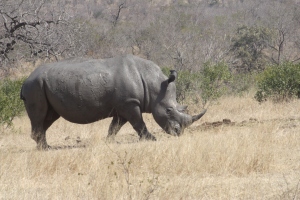 nd there are roundels, lodges and camping areas available.  You must leave the park or be in a camp by sunset as

My favorite road in Kruger in the southern end of Kruger is S-28, Nhlowa road which runs north and south along the eastern border of the park between Crocodile Gate camp and Lower Sabie camp.  It is a gravel road that runs through flat savanna with a couple of good sized waterholes that attract a variety of animals.  It was on S-28 that I first saw Leopard, Cheetah and Duke (one of the largest Tuskers in Kruger at the time…Duke died in 2011 about 2 weeks after my final sighting of him right next to S-28).  It is seldom that you drive down S-28 that you don’t see something exciting.

Your best chance of seeing lions is very early in the morning, the sooner you can get into the park the better.  If you get into the park just as it opens at dawn you may be lucky enough to find lions still sleeping or just beginning to stir along the tarred road.  Lions prefer the tarred road as its surface has heated up during the day and stays warm into the night.  The heat rising off a fresh hot pile of Rhino dung can also make a toasty bed for a lion on a chilly nigh 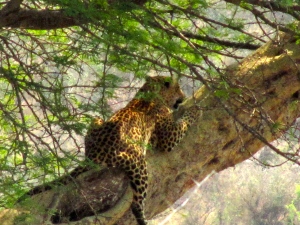 you are not allowed todrive in the park at night.  Most camps offer night drives into the park to view the animals that are most active at night.

If you are exceptionally lucky you might come across a pride with a fresh kill that they are still feasting on next to or near the road.  During the heat of the day you might find lions lying around sunning themselves on the rocks near one of the rivers or under the shade of a nice tree.  Lions hunt at night, and when not hunting or eating they just laze around doing not much do anything but napping except of course when they are mating.  A pair of lions separated from the rest of the pride are most likely a mating pair.  During the mating ritual the lions will couple every fifteen minutes for a few days.  They take short “cat” naps in between sessions, so if they are asleep when you spot them be patient as they will soon get up and begin the ritual again.

Next to lions, seeing Leopard is very exciting since they are more illusive and harder to see.  Leopards are singular animals and only get together to mate.  They hunt at night and generally drag their kill into a favorite tree for safe keeping so that they can enjoy their catch over several meals.  Cheetah are even more scarce that Leopard and have to compete with Lionsand Leopards for food so they generally hunt during the day while the other two are sleeping.

If you see the big 5 you will have had a luckyday but it is just a satisfying to see the Giraffe, Elephants, Water Buffalo, Hippos, Rhinos, Kudu and Impalas that are easily seen on any trip.  Any day at Kruger is a great day 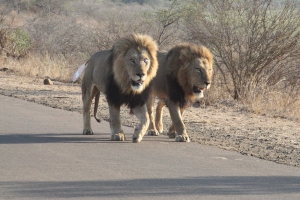