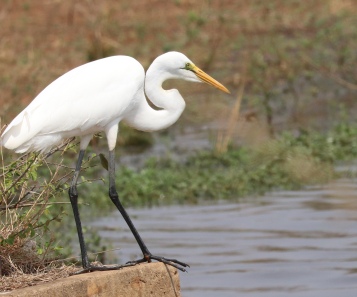 The Great Egret is the largest of the white Egrets with very long neck and legs.their bill is yellow with a dark line that extends from the bill to under and beyond the eye, this distinguishes it from the Yellow Billed Egret which is smaller and has yellow at the tops of their legs.  The Great Egret is fairly uncommon and can only be found near a dependable source of water.  They eat mainly fish, frogs, insects and reptiles.

I was fortunate to see one of these regal birds fishing at Sunset Dam just north of Lower Sabie Rest Camp in Kruger National Park.  The bird patiently waited  on one of the concrete pylons in the Dam for a tasty treat and was rewarded with a nice fish which it ate next to the pylon once it was caught. They prefer shallow inland waters where they can stand motionless waiting to spot prey.

The Great Egret nests in trees above the water or sometimes in reedbeds.  They are monogamous and live in colonies.  But are usually solitary when feeding. They have a raucous croak-croak which is given in flight.