Touring the Istrian Peninsula we stopped at the village of Rovinj.  This is a extremely picturesque town with red-rofed houses clustered around the hill with the Church of St. Euphemis at the top of the hill.  The church has a typical Venetian Bell Tower topped by a bronze statue of St, Euphemia. The present structure dates to the Baroque period, the baptistery stands on
Freedom square.  Ther 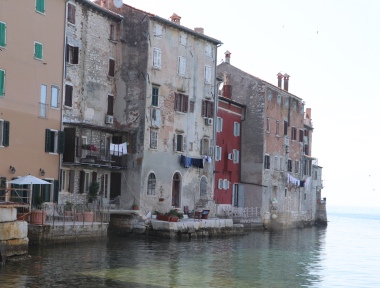 e is a Franciscan monastery on the eastern side of town.

The old town is packed into a small island with steep narrow streets and a winding main street.  Around the harbor filled with boats, are bright awnings and colorful cafes .  Artists, musicians, writers and actors have gravitated to this beautiful place finding apartments in the historic houses of the town.  The town center has been surrounded by a wall since the Dark Ages and is entered through seven gateways of which three remain in their original appearance.  There is a wonderful small market near the harbor with several stalls selling fresh produce and truffles both black and white and truffle oil. 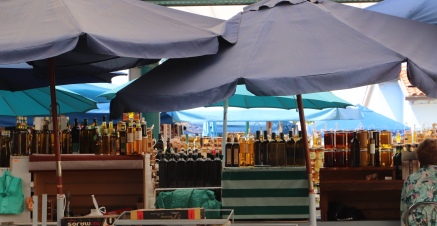 The area was originally inhabited in the pre-historic times and was conquered by the Romans in 177 BC..  When the empire was split it became part of the Eastern Empire.