Zebra are one of my favorite animals.  On my first trip to South Africa we had just gotten into the house in Marloth Park when a small group of Zebra came to the back door.  Zebra visit the property on a daily basis and are usually rewarded with pellets of wild animal food or with pieces of apple, carrots or cabbage leaves all of which they love. 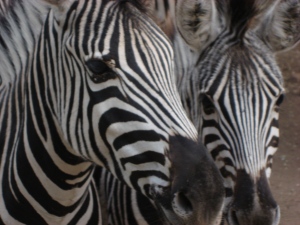 The Zebra in Marloth Park are somewhat tame and some will take bits of food directly from your hand much like feeding a horse.  Being social animals they usually come in small family groups and have no problemmixing with the Kudu, Impala and Bushbuck th 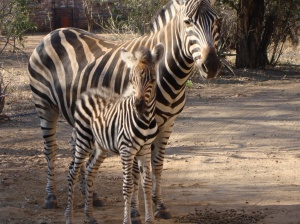 at alsovisit the yard.  Some of these family groups are sedate and calm getting along with one another and the other animals in the yard, other groups are quarrelsome and seem to carry on spirited disagreements between themselves and the other animals in the yard.  These latergroups you watch but keep your distance as there is generally a lot of kicking and verbal bantering going on.  It doesn’t take long to learn with groups are generally friendly and approachable and which are one you stand back from. 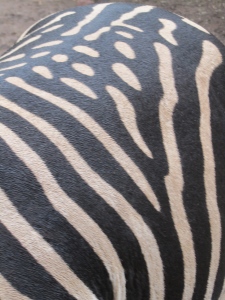 Each Zebra is different in its stripe pattern and it is impossible to find two Zebra exactly alike in the same herd although there are sometimes certain markings that identify several members of one family.  About a week after arriving on my first visit to South Africa we woke up tofind a mother Zebra and her new fold in the yard.  She had visited us every day and brought her new baby to the yard shortly after it was born…the baby had not yet learned to nurse from its mother and we were privileged  to be witness to her first lessons from mom.  “Baby” as she was named had a very unusual pattern on her back, a triangle with several circular and oval dots, this has allowed me to keep trackofher and her family over the years.  “Baby” was born in 2007, when I was back in

2009 I didn’tsee herbut neighbors said that she and her mother has occasionally  been in the area.  In 2011 we saw her with a new colt who also had the distinctive black triangle on his back with a couple of white circular dots.  By 2013 “Baby” was coming around to the house on a regular basis with her family, a male called “blacky” because of his lower legs being black, her son and a daughter and she was ready to have a new addition to her family. Zebras have a gestation period of about 12 months and have only one foal at a time. 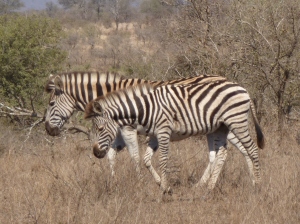 nd small herds and it is always fun to stopand watch a group interact with their animated banter, quick spats and quick to make up behavior.  In Kruger it is more important for the Zebra to keep into herds as there are predators in the park and Zebra is one of the favorite food of lions.  Zebra are grazers but will occasionally browse on leaves and scrub.  They need water daily and rarely wander far from a water hole or river.  In the heat of the day Zebra can often be seen in the shadeof trees or brushes in the park and also under covered carports in Marloth when there is no car at home.  They will stand quietly conserving energy often resting the 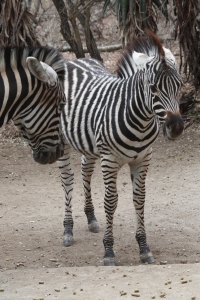 ir heads on each other backs.