No matter where one goes on safari in Africa the animals that top the “to see” list are the BIG 5…..Lion, Leopard, Elephant, Buffalo and Rhinoceros.  In Kruger National Park, one of the premier wildlife parks in the world, it 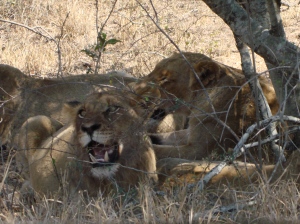 is relatively easy to spot most of, if not all, of the Big 5 in a single visit given a bit of luck.  Of course the Leopard is the most illusive of the five but, in the southern half of the park they are seen regularly so with patience and a bit of luck you will get your siting.  The second most illusive is the Rhino either. black or white can be hard to find.  There are substantial efforts to curb the killing of Rhino in Kruger National Park but it still happens.  Location of Rhino sitings are not published due to this, so unless you know the areas where it is most likely to see these magnificent creatures you have to hope one will cross your path during your day drive in the park.

It is always a game of chance in wildlife sitings, but due to the varietyand sheer numbers of animals in Kruger National Park, you have a good chance of spotting wildlife here more than anywhere

else in the region.  The winter months in Kruger, when there is less vegetation, improves the visibility, and the animals tend to gather around the remaining waterholes and rivers.  The success in any game viewing is to drive slowly, and to pay attention to your surroundings.  Unless ananimal is moving tois often very hard to see, even elephants.

The watering holes and rivers attract large herds of elephant and cape buffalo so it would be a rare day that you did not spot both of these animals in numbers.  Lions like to lay around in the sun on the rocky bluffs along the rivers during the middle of the day, in the early morning they can often be seen sleeping on the tarred road or right next to it.

The road holds the heat of the day and it also gives the lion a bit of advantage as prey running on the tarred road donot have the traction they would have in the bush.

Elephants abound in Kruger National Park, with over 12,000.  There is an elephant born every three days in Kruger so there are plenty to be seen.  It is not uncommon to see nursing herds making their way to or from the rivers.  Adult daily intake is over 200 liters of water and 250 kg, of vegetation.  Males live alone or in small groups and only interact with the females to breed.

Lions are the largest and strongest of the carnivores.  Being very social animals, lions  can live in prides of 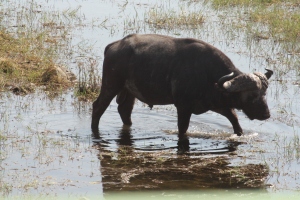 30 or more animals there are two large prides along the Crocodile River of 15 or more lions and can frequently be seen from the bridge or across the river from the look out spots in Marloth Park.

The Cape Buffaloare extremely powerful and dangerous.  They can weigh up to 800 kg. Except for the older bulls who live off by themselves in small groups, the buffalo live in herds of up to a thousand or more and are easily seen along the river beds near water. There are two variety of Rhinoceros in Kruger National Park, The white rhino with a wide mouth who is a grazer and the black rhino with a pointed mouth who is a browser.  Of the two the black rhino is the hardest to find, it tends to stay in the heavy thickets and eats branches and leaves whereas the white rhino prefers open grass lands making it easier to spot.  They are territorial and mark their territories by regularly defacating in the same location.

Most animals, including the Big 5 are most active early in the morning or in the late afternoon and evening.  Lions and Leopards are nocturnal along with the other cats in the park and hunt mainly at night.

Gate Bridge Camp to Punda Marie Camp in the far North.  These camps have bungalows, camping areas, restaurants, gift shops, petro stations, and if you are staying at a camp in the park, night drives with an experienced guide.

So with a little patience and a little luck, siting the Big 5 in Kruger National Park in one day trip is possible….but even if you are lucky you will want to come back again and again because once you have seen these magnificent animals you will want to see then again.  At this point in time I have spent over 8 months doing day safaris in Kruger National Park and am returning again the September for another two months.