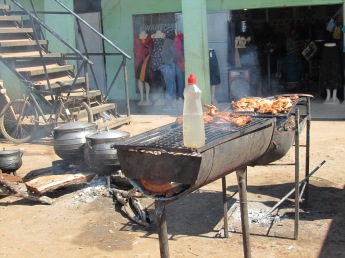 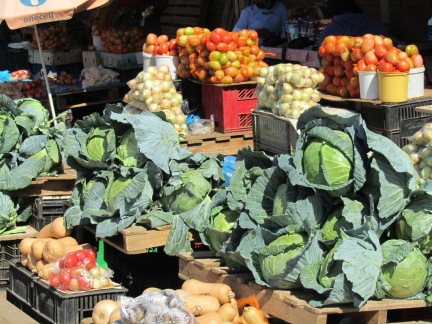 One of my favorite activities when I am traveling is to visit local markets and grocery stores.  It is always fun to see the colorful display of vegetables, fruits, handicrafts, stalls selling foods cooking, stalls selling traditional medicines, stalls selling clothing and household items as well as stalls selling fabrics.  Just about anything you can think about in portable goods can be found at these markets.  On Wednesday there is a traditional market in the town of Naas, which is a black community south of Marloth Park about half way to the boarder with Swaziland.  Here people come with their vegetables, fruits, bread, beans, chickens in cages, fabrics and a whole array of clothing stalls from shoes to suits can be found. 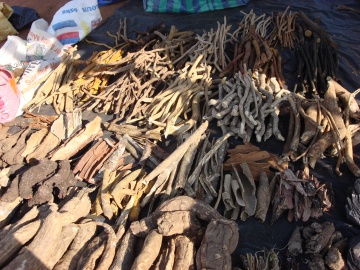 The most fascinating are the stalls selling traditional medicines that range from roots and barks to powders ground from colorful minerals.  There are several of these stalls and Constance our housekeeper, who lives in Naas and takes us to the market tries to explain what these roots, barks and minerals are used for.  In addition to the stalls there are cages of live chickens at the front of the market along with people cooking chicken over a charcoal grill which they sell with pap (a white cornmeal much that is a traditional dish of Southern Africa) and various degrees of hot sauces to spice up the meal. 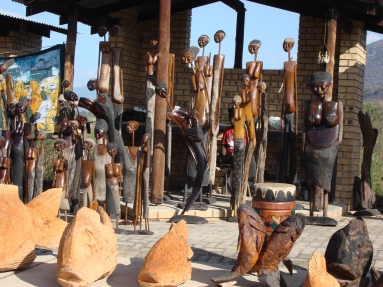 There are a couple of markets between Nelspruit and Marloth Park on the N4 that sell mainly fruit and traditional carvings from mainly Mozambique.  These range from figures to a variety of animals and birds.  Over the years I have bought several of the figures and animals…I like the ones with babies the best….for my house back in the states.  There is a small market in Komatipoort that also sells these handicrafts including cavings and ceramic containers that can be used for plantings in a yard.  Also in Komatipoort, a town about 8 km south of Crocodile River Bridge

entrance to Kruger, there are small market stalls set up along the main street of the town that sell a variety of vegetables, fruits and household items.  The items sold in these markets are considerably cheaper that those bought in the supermarket….and generally much fresher.  We usually buy for ourselves an for the animals including paw paw and cabbage for the animals…..avos, oranges, grapefruit, green peppers, tangerines and onions and tomatoes for the house.  I usually visit at least one market every week while I am in South Africa. 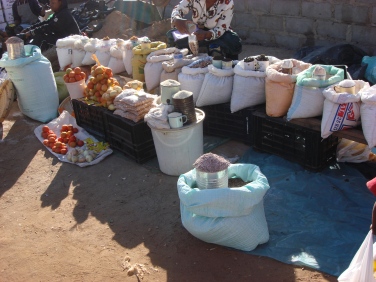