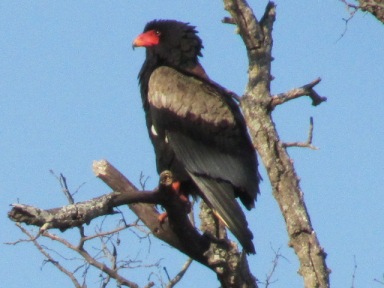 The Bateleur Eagle is one of the 54 typical raptors found in South Africa and is one of the most colorful raptors. These eagles are very distinctive with their red facial skin, grey shoulder patches and long wings that extend beyond its tail.  When perched its flight feathers appear black, in flight, black trailing edge to white underwing.

Their habitat is open and closed woodlands as well as arid and semi-arid regions, they are seldom found in mountianous regions.  The eat mainly small mammals, birds and reptiles.  They sometimes scavenge carrion.

They are generally silent.  They spend most of their day in the air gliding the thermals.