was founded by the Romans in 43 BC and lies at the foothills of the Alps.  It is France’s third largest city and its gastronomic capital.  During the Roman period it was one of the most important cities of the Roman Empire, and the capitol of Gaul, an area comprising most of modern France and Belgium.  In the Middle Ages it was an important trading city and later became the famed capitol of the French silk weaving industry and a major textile center.   Today it is a major industrial and business hub with excellent rails and road links.  It is a city to savor with its, Roman amphitheaters, parks and delightful old town. 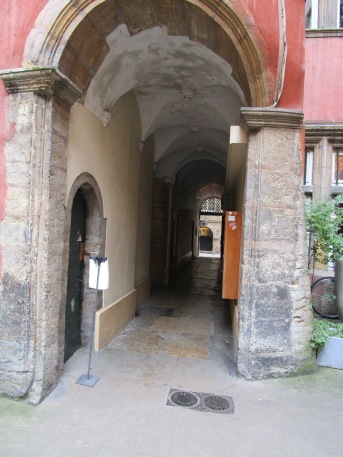 The Basilique de Fourviere, is set high on a hill above Lyon.  This 18th century basilica commands a panoramic position overlooking the cities rooftops.

Vieux Lyon, the medieval and renaissance area where the houses are divided into three quarters, St Paul (north), St Jean (middle), and St George(south).  Medieval  and Renaissance architecture can be seen along Rue du Boeuf, Rue St. Jean and Rue des Trois Maries.  There are 315 Traboules, passages linking 230 streets and courtyards in the old city some dating back to Roman Times.  Most were constructed by silk workers in the 19th century to transport silk in inclement weather.  Resistance fighters found them equally useful during WWII.