The Chacma Baboon is one of the primates that you will encounter in Marloth Park and on any trip to Kruger National Park in South Africa.  The Chacma is one of the many sub species of baboons 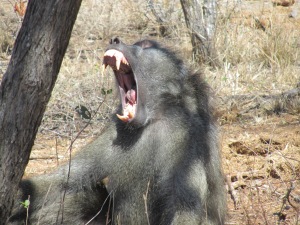 found on the African continent but the only one found in Kruger National Park.  Baboons live in large family groups up to 150 individuals and will have a territory of about 30 square kilometers. They have a very distinct and very ridged hierarchy within the group.  The group is led by a dominant male who has many “lower officers” to watch over and protect the entire group as they travel and forage through the bush.  Large males can be quite aggressive  when threatened and can easily take on a young leopard.   Their dog like snout gives them a fierce and less human-like facial appearance than most other primates.  The group will spend most of its time on the ground foraging  for fruits, insects, birds eggs, spiders and anything that can be eaten.  They can be quite aggressive  around camps and lodges where the 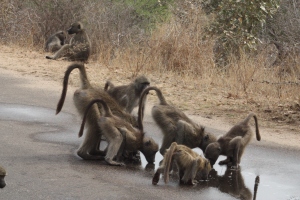 y are in hopes of tourists sharing food with them.

In communities like Marloth Park the baboons can be a menace  when then come by a property….if a door is open they are in the house in a flash creating a fantastic mess, if t 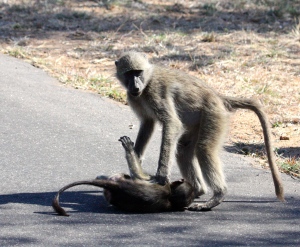 he doors are shut and lockeThey can be fierce fighters and can easily do serious damage to a full grown man.  But seeing them in the bush just interacting with one another and watching the youd it is not unknown for them to pick at the caulking around a window in order to get their hands in to open the latch and then enter the house.
g ones play and frolic  can be very entertaining.  As long as you realize they can be very dangerous you can enjoy seeing them in the wild