Lamu Island is our last stop on our trip to Kenya in 1995.  Lamu is a small island off the coast of Kenya, it is 12 miles long and 5 miles wide and consists of mainly high sand dunes and palm trees,  In its heyday it was a port of call for dhows sai 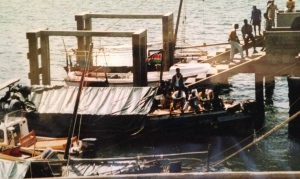 ling from Arabia to Zanzibar.  There are three towns on the island of Lamu, Shela , Matondoni and Lamu the main  town.  Shela is filled with high end resorts and Matondoni is a poor village on the other side of the island from Lamu.  Petley’s Inn is on the quay and is next to the National Museum of Lamu.  Transportation on Lamu is by donkey or dhow as there id no vehicular traffic onthe island with the exception of one tractor which we saw once or twice during our visit.  The waterfront road is Kenyetta Road and is dominated by administrative offices.  Lamu’s main street is Harambee Road whig leads to the market and Sultan’s fort.  The Moorish/Arab style architecture can be seen in many of the towns buildings. Petley’s Inn is famous on Lamu and was named after its first proprietor, a British born white hunter, eccentric who came to Lamu in 1898, Percy Petley.  He settled on Lamu to mend his wounds after being  badly trampled by an elephant.  The hotel retains much of its original character and its pub  remains the meeting place for travelers.  It is in the bar we met the current owner, Tom who is a real character and loves to talk and tell stories. Our rooms are on the second floor of the hotel facing the quay with a lovely veranda complete with wicker and carved furniture. There is no one else on our floor.  Our room stewart Joseph takes care of our room and is quick to bring us our favorite drinks when re return from sightseeing. My room has a huge carved bed that must be a king sized bed or larger, with four carved posts that go nearly to the ceiling that is at least fifteen feet high.  The bed id so high off the ground that you need steps to get into i 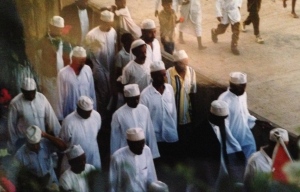 t. The grounds around the hotel are lush with flowering trees, and exotic plants making the place very peaceful.  WE have dinner at Petley’s and afterwards were entertained by music from the roof top restaurant while we relaxed on our own private veranda and watched the harbor. Mornings were an interesting time at the docks.  The quay comes alive with activity of loading and unloading dhows and the general hustle and bustle that goes with this type of sea port.  After breakfast we explored Lamu walking along the shore front and visiting the Museum and the Donkey Hospital.  On the street leading to the market we did a bit of shopping.  After lunch we went down to the quay to hire a dhow to take us sailing to Shela beach.  It was very windy and the sand along the shoreline was quite fine and silty making you sink below the surface above the tops of your ankles.  After a swim in the Indian Ocean we returned to our hotel and had drinks on the veranda after our shower.  After dinner at the hotel we went down the shorefront to Haki Haki, a shack that served the best fruit smoothies made with fresh pineapple, mango banana etc. all grown on the island. We watch the morning activity on the quay while Joseph brings us our morning coffee.  After coffee we walk into the market area and go to the Sultan’s Fort.  There is a lot of activity in town today as it is Mohammed’s birthday and there will be big celebrations and a parade this evening.   At noon we again hire a dhow from Omar and BoBo, the guys we went with yesterday to Shela beach.  Today we just sail around without any destination in mind.  We are eating at Hapi Hapi this evening as they are serving huge steamed crabs.  After dinner we go back to the hotel and sit on the veranda to watch the parade. Every mosque had their own group of men, some beating drums, that walked together, past the hotel and into the square:  at the end of the parade came the women and children.  In the square the celebration continued with dancing and singing. The Swahili town of Matondoni is our destination today with Omar and BoBo.  The women of the town weave reed mats and the men build dhows….we buy a few mats from the women before continuing our sailing around the island.  We stop at Coconut Beach in front of Richard Leakey’s estate on the island…here we take a swim and have a picnic lunch of fresh fruit the guys had brought with them .  We return to the quay about five and go to Hapi Hapi’s for our afternoon smoothie before returning to the hotel.  After dinner at hapi hapi’s we go into town and 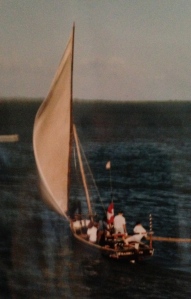 trade some clothing for some Kangas.  Tomorrow we leave Lamu for Nairobi and our flight home. Over the years i have kept in contact with Jackson and his Family as well as with Beatrice and Rob Dodson.  Jackson still is working in the Mara as a Guide…he is an avid user or facebook and twitter where he post the most fantastic pictures of lions, cheetah and leopards that inhabit the area he calls “his office”.  He comes to the states on occasion on promotional tours and has visited my home on Long Island. Rob works now in Tsavo on a wonderful conservation project called Wildlife Works….he is newly married and has a lovely daughter. From running Odyssey Safari and Olonana with jackson, they sold the enterprise to Abercrombie and Kent in 1996, he then went to manage a restaurant/disco/bar/and daycare center called Kaleidoscope for a year.  he moved back to the bush to the Chyulu Hills near Tsavo National Park  to run a camp called Ol Donyo Wuas.  He then moved to Tsavo and built an educational and field study center on an old cattle ranch called Rukinga.  He began working with a partner to establish a meaningful project for the benefit of the community and wildlife in Tsavo.  Wildlife works is a project that has developed several employment opportunities for the residents of the area to sustain a living and at the same time create a migration corridor between Tsavo East and West.  Wildlife Works goal is to leave the smallest carbon footprint possible.  Rob has been an innovator in conservation of wildlife and in helping the various peoples in Kenya and elsewhere sustain their culture without sacrificing nature.