San Juan La Laguna is my favorite of the towns around Lake Atitlan.  The town is only accessible by road via Tuk Tuk or car from San Pedro or San Marcos.  San Juan is a small Mayan Tz’utujil town of about 5600 people between San Pedro and San Pablo.  The town  originally San Juan Bautista, changed to San Juan when it was given the status of a Pueblo around 1618.

The inhabitants are known for, and take pride in their crafts mainly weaving and painting traditions.  The town has several master artists who all work in oil on canvas in the genre of Arte Naif.  The weavers are known for their use of natural dyes derived from the plants found around the lake.  Weaving of reed mats (potatoes) is another art form practiced by the artisans of San Juan.  The town offers a tranquil setting without the bothersome hawkers that you find in Santiago and Panajachel.

l weaving cooperatives in San Juan representing women.  They specialize in creating cotton and bamboo yarns which they spin and dye with naturals dyes including beets, carrots, lobelia, bougainvillea, walnut, etc. which they set with a solution made from the bark and stem of the banana plant.  The women use the traditional back strap looms in their homes and then construct their weavings into bags, skirts and other traditional clothing.

At the first woman’s cooperative we visited near the Hotel Maya San Juan, we were given a demonstration on how the cotton is prepared for spinning, how it is spun and dyed and how the looms are prepared for weaving.  Cooperative Weaving Women Keiji Chiji is the only coop that spins their own yarns and all or their products are made with 100% natural cotton that the women of the coop grow themselves.  All of their dyes are natural using age old techniques passed dow 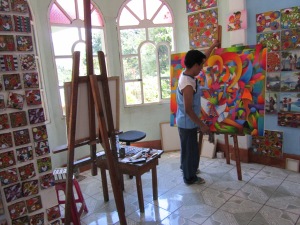 n from mother to daughter.  There are other associations in town that do their own dying and weaving.

After visiting the cooperative we ate lunch at the Hotel Maya San Juan.  Upon leaving the hotel we met Wilfred Alvarado a local Tuk Tuk driver who became our guide and driver for the rest of our stay in Guatemala.  Wilfredo’s english was very good and he was very knowledgeable about the area.  He took us to Galeria de Arte “Xokomeel”, that represented several painters includin

g Antonio Coche Mendoza and Angelina Quie Ixtamer.  Here I bought a painting in an abstract style depicting a woman weaving. There was also a woman painting using one of the techniques found in the paintings around the lake, “bird’s eye view” (painted from an above perspective), and “mouse view” painted looking up from the ground.  We then visited another gallery including the artist Felipe Uijson Mendoza who painted portraits using a pallet knife that looked similar to Van Gog’s style.   There were several other artist represented in the gallery. Wilfred then took us to a second woman’s weaving cooperative that represented about 45 women.

Our next stop was a visit to a small shrine or cofradia dedicated to San Simon and his alter ego Maximon known to the Mayans as Rilaj Maan.  The deity is revered throughout the Highlands, a combination of Maya God, Pedro d 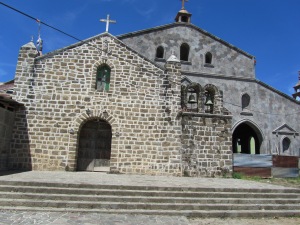 e Alvarado (the Spanish Conquistador) and the biblical Judas.  The shrine contains not only the statues of Maximon and San Simon but the statues of Christ and the Virgin along with candles and offering box. The various villages around the Highlands have their own interpretations of these deities and their own statues honoring them.  Confradias is a concept created in the Middle Ages in Europe and imported by the Spanish when then arrived in Central America.  A Confradia is a lay brotherhood that is invested with the well being of the local cathedral or church.  The local Confradia’s carry out cult activities and church maintenance functions and create a degree of indigenous empowerment within the parish community.

Wilfred took us next to see the Church of St John the Babtist, which is being rebuilt and o

nly the facade of the original church has survived and the new structure is being built directly behind this facade.  After visiting the church we visited the open air market next door (where Wilfred’s mother was selling tomatoes) and then to the Guatemala Highlands version of a Super Market called Super Quik.  The store carries food, plumbing supplies, housewares, gift wrap, cooking pots and other general items.  Although the store carries lots of items they are hard to find as the lighting is very poor.  After picking up a few items we returned to Pasaj.cap where Wilfred helped carry our bags down to our flat.  We visited San Juan several times buying paintings and several weavings.